Functional extension for the document management of Odoo

Our modules are exclusively available under the AGPL license and a detailed documentation in German language. The price depends on the number of users. Our sales department will be pleased to submit an individual offer. All prices are subject to VAT.

In the following we describe the OneDrive Connector.  This includes the same functions as the MyOdoo Nextcloud  and differs essentially only in the equipment. 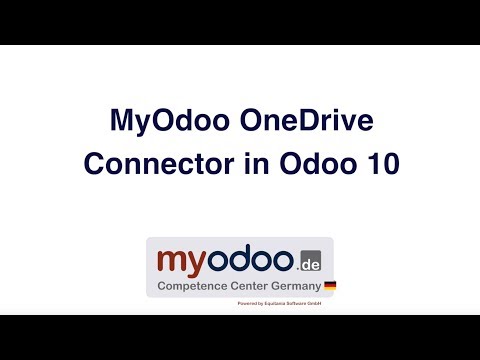 Under Apps, install the module MyOdoo OneDrive Connector or eq_cloud_onedrive, which is the technical name for our module. We also have the module in our
Module Wiki documentated.The added value of this app is that you can work bidirectionally with documents in Odoo. That means you can synchronize documents in both directions from Odoo to OneDrive and back to Odoo. A clear folder structure is created in the process.

The settings for OneDrive can be found in the general settings of Equitania Cloud. The setup is quite simple. In Microsoft Azure Portal you need to create an application ID and a secret key and then enter these credentials on the OneDrive configuration screen and save them once. The access data is stored in encrypted form. The steps are described in detail in our documentation. You can check whether your connection is successful in a connection test.

It is possible to customize the root folder. By default it is called ERP, but can be renamed. All subdirectories are renamed accordingly. What should not be synchronized can be deleted from the list using the multiple selection, e.g. if no product documents should be synchronized.

Now check the box Activate Cloud (note: without this check mark nothing will be synchronized!) and activate logging if necessary. Start the initial cronjob to transfer the existing documents to the OneDrive environment once. Your root folder and the subordinate folders including their contents will now be created. In OneDrive you will see them as soon as the cronjob has finished.

This application runs a service for newly created documents that synchronizes the data just in time between the two systems.

All common file formats such as JPEG, text files, Word or Pdfs are supported by the MyOdoo OneDrive Connector.

A document that is added to a customer in Odoo, for example, appears almost simultaneously in the corresponding folder in the Nextcloud. The same the other way round: a document that has been uploaded in the Nextcloud will also appear in the customer's odoo system under attachments shortly afterwards. In developer mode, you can also see the cloud path. A smart button can be used to switch directly to OneDrive.

The configuration effort is very low and there is no need to create folders manually. These are the main features of the MyOdoo OneDrive connection.

You can find the detailed module documentation in our Wiki

This package essentially consists of the modules:

Subject to change without notice.